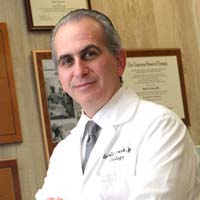 Ronald G. Frank, M.D., a Board Certified Urologist, maintains a private practice in West Orange, New Jersey. He graduated from New York Medical College in Valhalla, New York. He completed his urologic training at Maimonides Medical Center and also completed additional training in Renal Transplantation and Pediatric Urology at Kings County Hospital Center and SUNY Downstate Medical Center all in Brooklyn, New York. He has received dedicated training in Non-Scapel Vasectomy, Holmium laser lithotripsy and Greenlight Photoselective Vaporization of the Prostate (PVP). His areas of specialty include urologic cancer, stone disease, sexual dysfunction and prostate enlargement. Dr. Frank is a Fellow of the prestigious American College of Surgeons. He is a member of the American Urologic Association (AUA) and the New York section of the AUA. Dr. Frank is an Attending Urologist at Saint Barnabas Medical Center, a 645 bed hospital serving as New Jersey’s oldest and largest nonprofit nonsectarian hospital. The Saint Barnabas Medical Center is the flagship facility of Barnabas Health. He served as Section Chief of Urology from 2001-2003. In 2004, he served as the Chief of Surgical Subspecialties in the Department of Surgery. He received the Excellence in Caring Award and is frequently cited on patient satisfaction surveys. In addition, he is affiliated with The Stone Center facility located at the University of Medicine and Dentistry of New Jersey in Newark, New Jersey. Dr. Frank is the author of numerous publications covering a wide variety of topics in Urology. He is also a reviewer of manuscripts for the respected urologic journal, UROLOGY. He has appeared on radio and television discussing topics of interest in the field of Urology and he is often quoted in the media. Dr. Frank was recognized by Saint Barnabas Medical Center in the “I Love My Doctor” campaign event held on October 2009.